“Sahaja” in Sanskrit means spontaneous and also born with,” Yoga” means union with God. The potential to the spiritual awakening and ascent is inborn in every human being. This potential is possible to be actualized through a unique living process of Sahaja Yoga. This unique discovery has been done by Shri Mataji Nirmala Devi (in 1970).The process of Sahaja Yoga is spontaneous and natural. It is a technique to awaken the Kundalini Shakti which lies in the sleeping state at the base of the spine (sacrum bone) of each human being. The process of awakening this Kundalini (Self Realisation) is a spontaneous and joy giving process, quite contrary to the widespread misinformation about it.


There are seven chakras (energy centers) basically within us. These seven chakras are responsible for our physical, emotional and mental well being. Once we get our Self Realisation we feel these centers in the Subtle System within us. As the Kundalini rises and passes through the six centers (which are our energy centers in the spinal cord) and pierces through the fontanel bone area on the top of our head, it nourishes and revitalizes the centers (chakras) so that the person feels relaxed, calm and full of life.

These centers are are meant for our physical, mental, emotional and spiritual requirements. These centers are enlightened. Once the Kundalini pierces through the last center, which is the fontanel bone area, which was a soft bone in our childhood, it becomes one with the all-pervading power of the Divine love. A cool breeze, like very beautiful vibrations, starts flowing through the fingertips .We can also feel the cool breeze coming out of the fontanel bone area on the top of our head. This is the first experience of Self-Realisation.

The second experience is that, when this Kundalini rises, she creates a state of thoughtless awareness (Nirvichar Samadhi). Human beings are always thinking about the future or about the past. When the Kundalini rises, these thoughts elongate. There is a space, very small, between the thoughts (vilamba), which spread out, and a state of complete silence is created. Then, we are in the present, but without thoughts, without any worry, without any anger and we stand in the present, which is the reality, and the past is no more and the future does not exist. 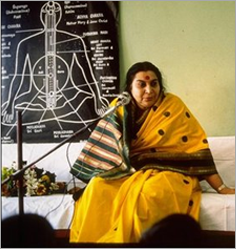 Sahaja Yoga has a beneficial impact on every aspect of a person's life - that is mental, physical, material, emotional and spiritual life. A rejuvenated human being finds unknown depths of energy and creativity to better his living conditions; and to lead a more meaningful life. The practice of Sahaja Yoga makes a person calm and collected and able to cope more easily and effectively with the strains and stresses of life. It not only prevents but also cures the innumerable diseases which are the outcome of modern day living - such as high blood pressure, heart diseases, diabetes, mental disorders ,etc. There is increasing medical proof of the curative powers of Sahaja Yoga as per many experiments conducted. Its ability to cure alcoholism, smoking and drug addiction has been established beyond doubt. Sahaja Yoga has also cured several cases of paralysis,epilepsy, cancer and asthma among other diseases. By bringing about an inner transformation of human beings, the benefits of Sahaja Yoga accrue not only to the individual but also to society, to the nation and ultimately to the entire humanity. Sahaja Yoga brings about integration of all the major religions of the world.

What is special and unique about Sahaja Yoga?

Sahaja Yoga is not merely philosophical, but an experience first and philosophy later.
It is a simple system in which Self Realisation i.e., the union with your Divine Self takes place spontaneously. The process of Kundalini awakening is done enmasse by Shri Mataji in Her public programs. Sahaja yoga can be practiced by everyone irrespective of one's caste ,creed, race, religion and nationality,etc. Sahaja Yoga is now practiced worldwide, in as many as 90 nations. Sahaja Yoga is based on experience and not obtruse philosophy. It seeks to clarify than mystify. It provides a real basis for a verification of its claims. Based on Vibratory Awareness which can be attained after Self Realisation and establishment in Sahaja meditation, the seeker can judge for himself the truth. It has no rituals, no do's and don'ts but the practitioner of Sahaja Yoga automatically gives up all bad habits and starts leading a Dharmic life. Just as one light enlightens another, in the same way one can enlighten many i.e., through the grace of Shri Mataji the self realized person can give realization to other seekers.

Sahaja Yoga meditation is very easy and any one can do it along with his profession and family life. People from all walks of life can derive benefits, irrespective of their religion, caste or creed. Health improves. Physical diseases relating to Heart, diabetes, blood pressure, stomach ailments, and also other mental illnesses due to stress, tension, worries, as also insomnia, depression, fits, and many other psycho somatic diseases have been easily cured. Natural cure from various addictions. Improvement and harmony in family life and social relations. No need for any sort of rituals, penances, fasts, asceticism or physical deprivations. Progress in studies due to improvement in memory. Latest artistic talents get fully developed. We become courageous and confident. Peace, contentment and joy are hallmarks of Sahaja Yoga. It is an entirely scientific technique with no scope for blind faith. Self Realization through Sahaja Yoga is entirely free.

Nobel Peace Prize nominee
Romania, 1995, Awarded PhD in Cognitive Science from the Ecological University of Bucarest
China, 1995, Official guest speaker at the Women's Conference in Beijing as a guest of the Chinese Government
Brazil, 1994, Presented with the key to the City of Brasilia following official sponsorship of the series of Sahaja Yoga programs in the country
St. Petersburg, URS 1993, Invited to inaugurate the now annual International Conference on Medicine and Self-Knowledge.
Moscow, 1989, Government sponsorship of Sahaja Yoga research granted after meeting between Shri Mataji and the Russian Minister of Health at that time.
Italy, 1989, Named Personality of the Year by the Italian Government.